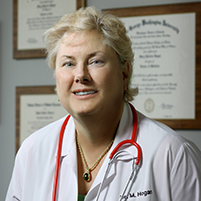 Dr. Mary Hogan, M.D., is an established and highly skilled physician with over 30 years of experience in Obstetrics and Gynecology. Dr. Hogan attended the George Washington University School of Medicine and Health Sciences where she was a member of AOA, the honorary medical society and earned her M.D.  She completed a residency at the George Washington University Hospital and affiliated hospitals.

Dr. Hogan was well regarded in the Baltimore community, earning numerous accolades for her outstanding patient care.  Dr. Hogan was voted “Best Gynecologist of 1997” in Columbia Magazine and one of the Top Docs by Baltimore Magazine in 2002.  She was named to Chesapeake Magazine’s 2001 List of Favorite Doctors.  She has served as President of the Medical Staff and Chair of the Department of OB/GYN at Howard County General Hospital.

Dr. Hogan relocated to Prescott and joined Women’s Medical Care in 2017, where she continues to care for Gynecology patients.  She has a special interest in menopause, hormone replacement therapy, laparoscopic surgery, well woman examinations and birth control counseling.

Dr. Hogan is married to Dr. Michael G. Macon, M.D., they are both very excited about relocating to Prescott to be closer to family.